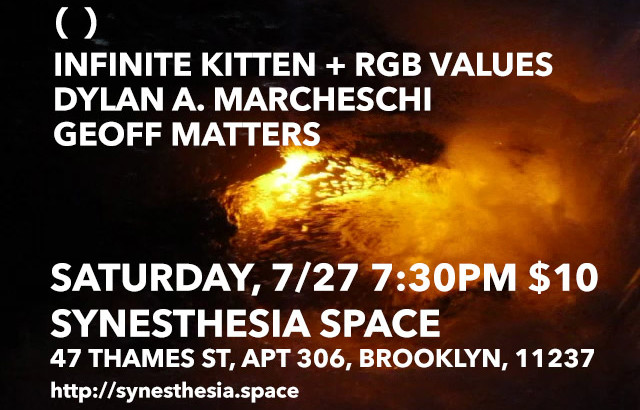 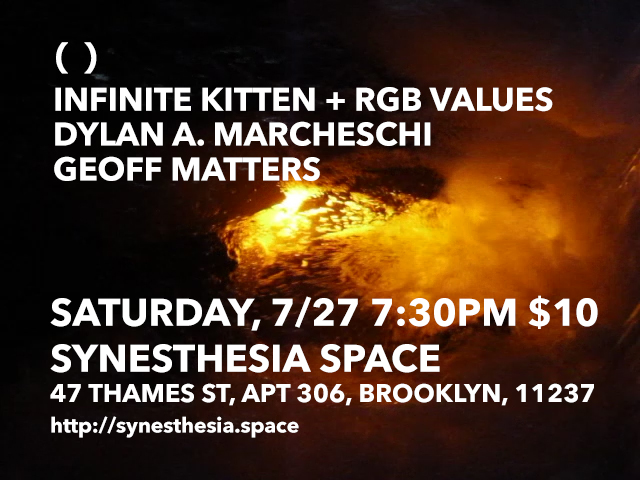 ( ), JEREMY D SLATER is an intermedia artist and performer creating compositions consisting of environmental sound, ambient noise, sequencing, drones, guitar, and ambient/reactive video. ( ) creates single and multiple channel videos for screening and installations with sound and ephemeral sculpture. ( ) is a member of Plan 23, ROTC (Rubaiyats of the Cicadas), Frogwell, and tū. ( ) has performed in the United States, Canada, England, Germany, France, Italy, South Korea, and Japan.

They perform as a duo, but also as solo artists as well as a VJ duo known as RGB Values + n8tronick.

NateTronick is the founder of NY ELECTRONIC UNDERGROUND an ongoing series of parties that bring NYC events based on Live Electronic Music performance in a party atmosphere. They have an ongoing performance relationship with The WARPER PARTY as well as performing at other venues and events such as Disorient’s Country Club and the deeply secret Summer Camp.

DYLAN A. MARCHESCHI is a New York based multi-disciplinary artist working across a range of audio-visual arts, most prominently film, sound art, animation, generative video, and psychoacoustics. His work has appeared in a variety of major print and broadcast mediums. He is a Brooklyn Arts Council 2019 grant recipient.

GEOFF MATTERS works with sound and light. You may have run into him shredding with his electronic punk band, projecting decorations around galleries and parties, experimenting his way through a dance performance soundtrack, or plugging you in at your local jam session.