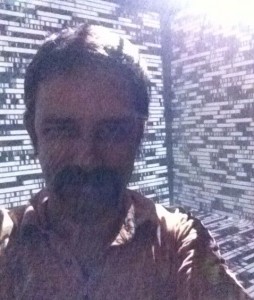 If you are weird and wanted to be inspired to do amazing things with your brain, this is the guy you would want to know. Mark Alan Johnson was known by everybody as VJ DoctorMojo, not just Mojo, although that’s what everybody called him. Once when putting the schedule together when I was doing my first curatorial work for WARPER PARTY, I listed him as MOJO, but he immediately corrected me as soon as I sent out the schedule. I never forgot that and he rarely signed up to perform, but performed more than anybody else. I could always count on him to show up and dazzle everybody and make all of the musicians look amazing. I am one of those musicians. He also inspired me to want to VJ and learn VDMX and when my soon-to-be-wife, Julia saw what I was doing and wanted to start VJ-ing too, I had only one person to send her to when I could not answer all of her questions. Mojo was not stingy with his wealth of knowledge and he was enthusiastic whenever someone wanted to learn what he was a supreme expert at already. He happily informed me that when you download VDMX and load it for the first time, you will see some of his shaders which were the defaults that he generously provided to the developers of the program.

I met Mojo at HOUSE OF YES 2.0 during a VITAMIN B party. My friend Olga introduced us and he said right away that he wanted to do visuals at this party as he noticed that visuals were the one thing this party seemed to be lacking. He walked off to meet TEKTITE, John Pilitowski, the party’s organizer and I went back to dancing. The next month when I went back to the party, he was set up doing projections and became their resident visualist from there on out. For several years, I never missed a VITAMIN B party, so I saw his visuals there often.

I had already performed at WARPER PARTY a few times, by the time I realized the VJ DoctorMojo was a regular performer. The venue changed a few times and I got more involved with the inner-workings of the event as my regular performances became more and more regular. Eventually DJ SHAKEY the events co-founder and main organizer asked me to do a few things that helped demonstrate my enthusiasm and sense of accountability as well as having a sense of being able to handle some administrative tasks. She asked me to curate a house at the FIGMENT festival in 2014. This happened on extremely short notice and when the project dropped, I had no more than a week to put it together. Mojo showed up with another projectionist MIXXY aka Melissa Ulto; and the two of them put together an installation and helped to make my first WARPER HOUSE a success. 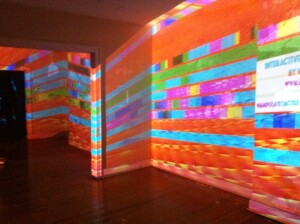 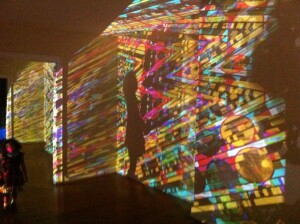 VJ DoctorMojo would go on to create some of the most interesting and dazzling installations for my annual multi-story house of digital art and music. Most notably, he set up a multi-room, multi-projector interactive installation where, he placed in the room an object he had constructed out of soft material. It was in the shape of a stellated cube, which looks like a cube with pyramids extruded on each facet. Inside of the object he put his i-Phone, which he explained, was streaming the accelerometer data to his laptop using Bluetooth. This controlled several parameters of the visuals, so kids of all ages could walk in and pick this object up and discover that moving it had an effect on the visuals that were filling the room in an immersive manner. To say this was mind-blowing was a bit of an understatement. Everyone who entered the space was completely bewildered by it’s awesomeness!

After that experience, I started regularly curating the WARPER PARTY and other Warper events. VJ DoctorMojo was a regular and was so consistent that I did my best to give him his pick of artists to perform with. I happened to be also quite fond of performing with him also, so I have many performances with INFINITE KITTEN vs. VJ DoctorMojo.

I remember spending my birthday at his studio in 2016 when he was doing a 360 DEV STUDIO installation. he had projections on all four walls and the floor, all seamlessly integrated, so the boundaries of the room dissolved into pure light and abstraction. He was a genius who never ceased his obsessive experimentation. After this immersive birthday, I decided that I wanted to delve deeper into VDMX and began learning as much as possible. Without being a pest, I asked him questions whenever I was stumped. Not only did he answer my inquiries, he also could off the top of his head troubleshoot my situation by asking whether it was one condition or another, so he would determine the right set of circumstances to for which to provide an answer.

RGB Values and I got to visit his META-7 dome project in Long Island City, one night while XIX Collective was beta-testing.  RGB got play and perform, projecting visuals on the dome while Mojo manipulated the output. Again, it was always next-level technology and play happening. He put on a serious front, but was always scheming and playing with every idea that passed through him. Everything he experienced became output as art, ideas and inspiration. His mantra THE CODE IS THE CONTENT will resonate with me forever!

I was also friends with him outside of the context of performance and parties and discovered that we had a lot in common, something, I actually figured out within the first 10 minutes of meeting him. He had similar esoteric interests and would regale me with stories from the wild days, which could even have been last week. He was a controlled wildman who knew how to have a good time, but always seemed to be able to keep himself under control. He was no amatuer at anything that he did.

Thinking back about Mojo, I realize that he is someone who has quietly participated in many of my most enjoyable experiences over the last decade. He put off an almost antisocial front and sometimes seemed sort of gruff, but had so many friends  and was so involved with so many projects, that I’m sure my involvement in his life and career as an artist was a mere drop in the bucket of his massively prolific lifestyle. Regardless, he made quite an impact on my life and I got to have a few adventures with him as well.

The last time I saw Mojo, I was at The Keep in the Spring of 2021. We went out to have a much needed break from isolation and listen to some live music. Mark popped in when I was getting ready to leave.  I was so glad to see him. We exchanged a few words about things starting to pick back up again and the events that we want to get started doing. I could never have predicted that this could be my last conversation with one of my favorite genius rascals.

When I learned of his passing I was absolutely devastated. I have lost a few friends during these last couple of years, and this one is really hitting me hard. In memory of VJ DoctorMojo, I want to remind everyone to think for themselves and question both reality and authority! Mojo stood for civil disobedience, but was cautious to not-do anything stupid that will get you into trouble. That doesn’t mean that you will not get into trouble, but you need to maintain self-control. Be smart, be methodical and only do whatever you think you can get away with. That may very well be the mantra of doing what Mojo would do.

Thank you for everything DJ DoctorMojo, AKA, Mark Alan Johnson.